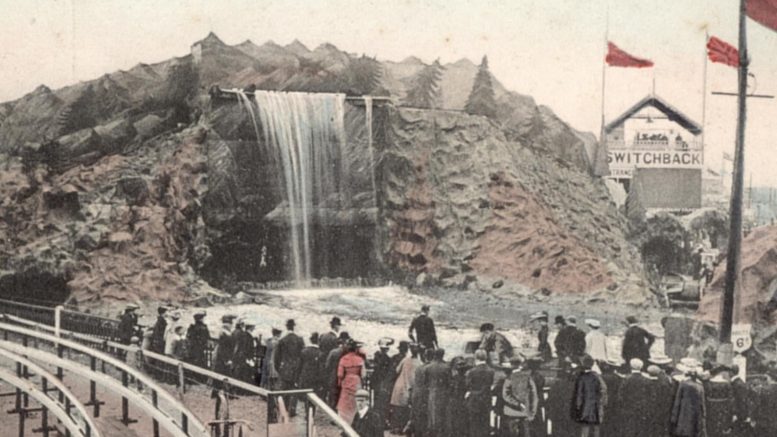 This year Blackpool Pleasure Beach, in this most unprecedented time, will celebrate its 125th Birthday.

So let’s have a rundown of the keys heritage facts in its history.

1760’s: Daggers Hole Lane appears, stretching from the shore to the eastern edge of the common, this later became Watson’s Lane, Watson Road later followed at a later date, I must admit I didn’t think the history of the road went back that far.

1896: Blackpool Pleasure Beach of course is a family owned company. The Pleasure Beach, as we know it today, was founded by William George Bean who, in 1896, in conjunction with a partner, John Outhwaite, bought the forty-two acre site on which the park now stands. Prior to this, there had been a small fairground at South Shore consisting of a few roundabouts, a switchback railway, games stalls and fortune tellers.

W.G. Bean was inspired to build an America-style Amusement Park and introduced the Hotchkiss Bicycle Railroad to the site in July 1896.

He travelled extensively, bringing new rides and ideas to the Pleasure Beach. Noah’s Ark and Sir Hiram Maxim’s Flying Machines are two of his attractions which still survive today. Before he died in 1929 he had established the Pleasure Beach as one of Blackpool’s greatest attractions

1901: Outhwaite and Bean joined together. In 1902, the Watson brothers bought a stretch of land between the fairgrounds and the end of the Promenade. The brothers’ and the Council’s, intention was to stop it from encroaching further towards the town. The Big Dipper, a new Switchback Railway was built at the Pleasure Beach, costing £25,000. It was opened to the public on August 23.

It is now the second-oldest in-use rollercoaster in Britain (after the Scenic Railway at Margate – built in 1920). The first in the UK to use the friction created by under-track wheels, it was designed by John Miller.

His early work had been for the Philadelphia Toboggan Company, who even today supply coaster trains to the Blackpool Pleasure Beach Company.

The ride was built by William Strickler and was the first in the world to bear the Big Dipper name.

Strickler fell from his new Noah’s Ark at Southport’s Pleasureland on April 4 1930. He sadly died later, in a Blackpool nursing home, and is buried in Layton Cemetery.

1903: Outhwaite and Bean loaned £30,000 from the Royal Liverpool Friendly Society and bought 40 acres of sand near the Star Inn known as “Watson’s Estate” for leasing as an amusement park. This grew into the Pleasure Beach.

The Pleasure Beach name was first used in 1905. The park officially opened for business, surrounded by the 42-acre gypsy encampment. One of the first rides was the River Caves of the World, complete with its famous Blue Grotto. This was probably the world’s first dark ride.

The famous Lighthouse Helter Skelter also opened – the UK’s first – and welcomed its passengers via a pathway made of railway sleepers, to stop them sinking into the sand. In the late 1920, a chair lift escalator was fitted to the exterior. It was removed in 1935, and its top sold to a house owner on the Norfolk Broads. The Big Wheel at Earl’s Court had been moved to the Pleasure Beach for the opening. Built by Maudsley Sons and Field, it was of the enclosed variety and stayed until the end of the 1920s.

1904: August saw the launch of the ever-popular Sir Hiram Maxim Captive Flying Machine – the oldest continuous working amusement park ride not only in Blackpool Pleasure Beach but in Europe too.

1910 – 1920: Following the First World War, investment in the park stopped due to the difficulty in exporting rides from the United States. Despite this, profits soared and the company was one of the most prolific employers in the North West.

1920 – 1930: The 1920s saw a period of great development with the opening of Noah’s Ark and The Virginia Reel. This was followed by the classic Big Dipper wooden rollercoaster.

1930 – 1940: In the 1930s, Leonard Thompson succeeded his father-in-law to become Managing Director of Blackpool Pleasure Beach and took over the running of the park.

This decade saw the introduction of many new rides including The Rollercoaster, The Pleasure Beach Express and the world famous, twin-tracked coaster, The Grand National.

The cheery face of Mr Funshine was the official logo of Blackpool Pleasure Beach for more than 70 years.

Despite being retired in 2006, his big beaming yellow face is still hugely popular with visitors to the park and is still to be found brightening up souvenirs.

The logo was designed by Tom Purvis, a British graphic designer and illustrator whose art deco design work covered many aspects of Blackpool Pleasure Beach including posters, programme covers, and postcards.

n With thanks to Nick Moore, Visit Blackpool, Blackpool Pleasure Beach Marketing & archive department for all the extra information.

This water feature graced the original River Caves of the World in 1905, alongside the Bicycle Railway

Adults may be suffering undetected health conditions, such as glaucoma, diabetic retinopathy, macular degeneration and even heart disease – because two million people missed a routine eye test during lockdown.Specsavers usually carry out around 8.6 million eye examinations annually and refer more than 600,000 people to hospital or their GP for further investigations.But millions missed tests at the height of the pandemic (March to September 2020) -and almost 130,000 fewer people were referred – meaning many could be unaware they have a health problem.Figures for the same period also revealed referrals were down by nearly half for glaucoma, known as the ‘silent thief of sight’ due to it often being completely symptom-free.A further study of 2,000 adults has revealed that at least one in 10 people fear they might have a serious underlying sight condition, while one in 20 worry that they have a potentially significant issue with their hearing.While half of adults think either their sight, hearing or both have deteriorated since the pandemic began – two thirds (66 per cent) of those have not yet booked a test.According to the research as part of Specsavers Hindsight Report, one in eight (13 per cent) have also missed a hearing test in the last year. Fleetwood Weekly News…

Barrie McKay is hoping to kick on in the Fleetwood Town side, having scored Monday’s winner at AFC Wimbledon. Fleetwood Weekly News…

Lancashire County Council has insisted that it is providing good value for money after new figures revealed how many staff in top jobs receive more than £100,000 per year. Fleetwood Weekly News…

Barrie McKay’s came off the bench to score a last-gasp goal and get Fleetwood back to winning ways in the capital. Fleetwood Weekly News…

You can’t keep a good striker down, and Peterborough’s Jonson Clarke-Harris showed his class late in the day to snatch victory at Highbury. Fleetwood Weekly News…